The Minimalist Kitchen by Melissa Coleman 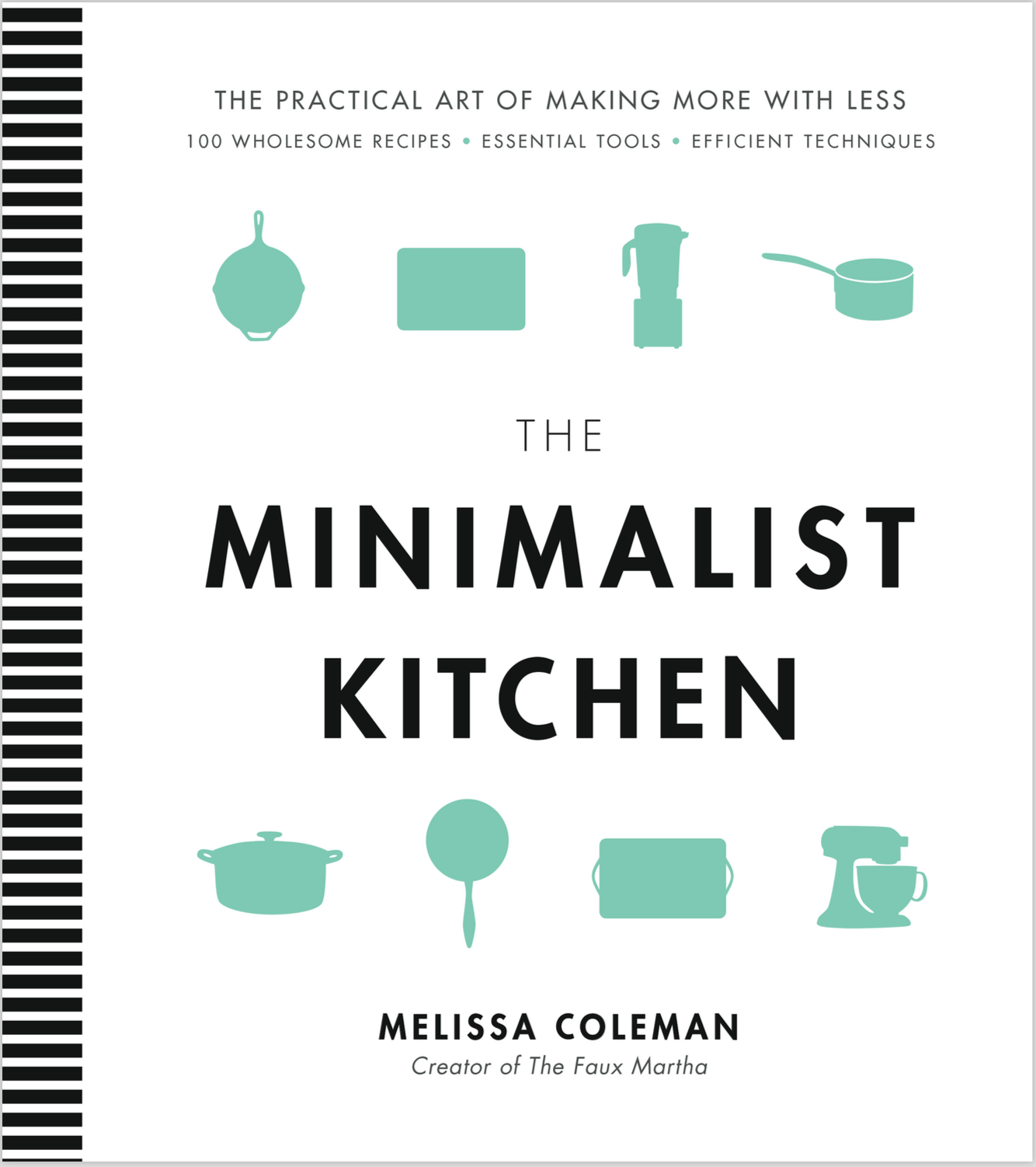 There were several reasons I had to read Melissa Coleman’s The Minimalist Kitchen. With my small apartment kitchen, minimalism is mandatory. Also, who cannot read someone who calls themselves The Faux Martha, a genius mix of fangirling, self-deprecation, and the perfect humblebrag since you have to be pretty good to be faux.

The Minimalist Kitchen begins with an incredibly useful kitchen organizing and pantry guide including a list of ingredients you should have on hand as they will be used often. She does not encourage having every spice that ever grew, noting they become stale while taking up space in your spice drawer. She is beautifully organized and I am jealous of her containers. She does not have a long list of utensils, though it is still slightly longer than mine. But she doesn’t have a food processor, so yeah, she’s minimalist.

She organizes her recipes sensibly which makes me happy. There’s Breakfast, Main Dishes, Burgers, Wraps & Sandwiches, Soups and Salads, Sides, Drinks, and Desserts. Much logic, such common sense. To make your life even easier, there is a recipe index and a subject index where you can look up such things as expiration dates and buying in bulk to get her advice on a range of things.

Sometimes she mistakes fast for easy, though. For example, her recipe for a Dutch Baby suggests mixing in a blender. You know that’s harder to wash than a bowl and seriously, a whisk can beat those eggs in a minute. She probably has a dishwasher. I tried it, though, to see if it made a better Dutch Baby, but no, it doesn’t. In fact, oddly, the Dutch Baby stuck to the skillet in a couple spots though I think that was happenstance and not her recipe’s fault. The blender was hella more difficult to clean than the simple metal bowl I usually use.

The recipes are well-chosen with a good mix of basics (scrambled eggs) and more complex dishes including flavorful comfort foods from around the world. Her emphasis is on flavor and fun, you can tell she considers her kids when cooking with lots of finger foods, sandwiches, wraps, tacos, and fun desserts. The food is colorful, sure to please your eyes.

Everything is approachable, including the pictures which feature foods that are not too perfect, a bit of over-browning on one part of a galette, slightly uneven sandwiches. It’s all close to perfect, but not so close home cooks will be discouraged from trying. She’s a home cook and the rest of us home cooks can look at the pictures and think, yeah, I can do that. I think cookbook publishers have no idea how important that is. Impress me, yes! Intimidate me, nope.

She mentions hygge several times. It’s the Danish concept of feeling cozy in simple pleasures. I wish she had used the Swedish concept lagom, not too much–not too little, which actually fits the wabi-sabi aesthetic she enjoys better than hygge which seems to find its expression in America through consumption in the form of candles, lamps, quilts, and all sorts of other merchandise. I suppose if we count to a thousand, there will be a marketing campaign around lagom, too. What really surprises me is that she omits fika which is such an important part of that simple life, taking the time to sit down, chat with friends over coffee and cookies.

I received an e-galley of The Minimalist Kitchen  from the publisher through NetGalley. It will be published on April 20th.

The Minimalist Kitchen is published by Time, Inc. but is not posted to their site. (at Powell’s Books)