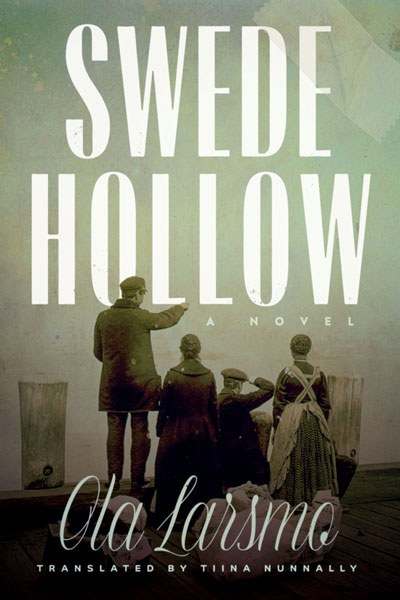 Swede Hollow tells the story of a Swedish immigrant family, Gustaf and Anna Klar, their three children, and successive generations. It begins in Liverpool where the family traveled from Göteborg before boarding a White Star Line ship to New York and by rail to Minnesota, When my uncle and grandparents immigrated, they also went from Göteborg to Liverpool and boarded a White Star Line ship though they went to Quebec City instead. My grandparents took the Canadian Pacific to Minnesota while the Klars took the Great Northern. Still, the similarities were striking at the beginning. My grandfather and Gustaf Klar were both shoemakers, too. From there they diverged, my grandparents choosing to homestead while the Klars were city folk, trying their luck in New York City before settling in Swede Hollow in St. Paul.

This is the story of their struggle and the struggles of their neighbors to carve out a life in the city. There story reflects the true history of the immigrant community. While the Klars and their neighbors are inventions, the happenings are based on historical events. This is emphasized by some story elements presented as news articles. Their lives are hardscrabble marked by ambition, hard work, labor strife, and poverty. I loved the book and hated it to end.

Swede Hollow is an excellent book and you don’t have to be the granddaughter of Swedish immigrants to enjoy it. The characters are well-developed and complex. Even when wrong-headed, the reader can understand why they do what they do. It is a timely reminder that xenophobia is a constant and that immigrants often are people with deep, abiding ambition.

There is a fairly large group of characters, fellow travelers on the White Star Line, neighbors, and employers. There are ethnic rivalries and biases. Hamm’s Beer, for example, would only employ Germans. The narrative shifts from one to another.  One of the more interesting characters is Inga, a woman who immigrated on her own mind and influenced the others. These immigrants struggled to wrest a life for themselves and build a future. I am grateful for them and the people who inspired them. I am also grateful someone had taken on the task of telling their story.

I received an e-galley of Swede Hollow from the publisher via NetGalley.